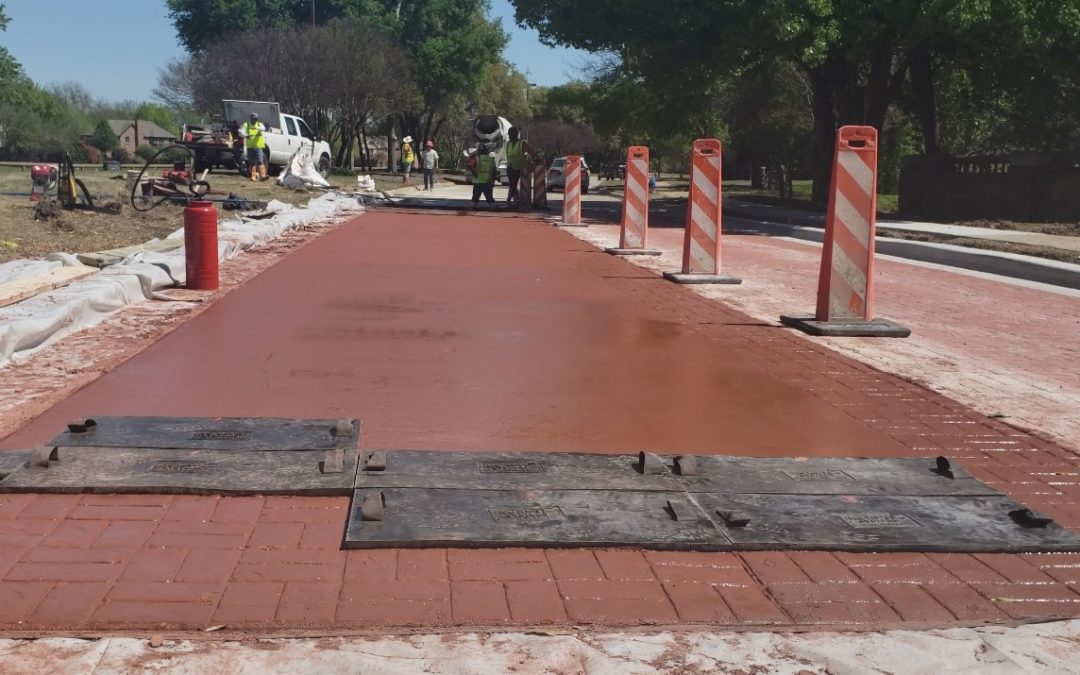 Stamped concrete is a unique and decorative approach to replacing standard grey concrete installation. It can be used anywhere from residential walkways to commercial parking lots, industrial roundabouts, city streets, and high-volume thoroughfares. The result is a custom appearance built to both impress and last.

The streets department at the city of McKinney, TX, came to us at CI Pavement with a project to remove and replace the traditional brick pavers they had historically used within their city streets. These pavers served to break up the monotonous color of standard concrete and accented the locations of bridges, intersections, and other areas of differentiation. However, the bricks tended to shift over time and were simply not as reliable cast-in-place concrete, especially in high traffic areas. Thus, stamped concrete was the perfect solution to provide the same attractive look of stone, wood, or bricks without the limitations of these traditional construction methods.

We sprung into action and derived a specification for a charming brick layout that provided a permanent and tough pavement surface to stand up to the city’s stringent demands. Since safety is always of utmost importance, arrow boards and other signage were implemented to let oncoming traffic know lanes were to be closed on this 40-mph street. The project was also broken into two separate placements to allow vehicles to still traverse the area.

After we secured the site, an integral coloring agent was used to ensure that future trauma or damage to the concrete would not result in a lighter color being exposed in the substratum of the concrete; this can be a troubling problem if pavement is merely surface colored or stained. Additionally, new curbs were placed on either side of the drive lane and then covered with plastic to ensure the new color would not stain the new curbing during the placement process.

Once some of the moisture had dissipated after concrete placement, a releasing agent was applied, and the surface stamping commenced using a prefabricated form to create the desired pattern.  The process was continually repeated to cover all square footage and – voila! The stamped concrete was traditionally alluring yet structurally sound and ready for traffic!

Take a moment to watch our video above on the process and contact us today for all your stamped concrete needs in the grater Dallas/Fort Worth area.